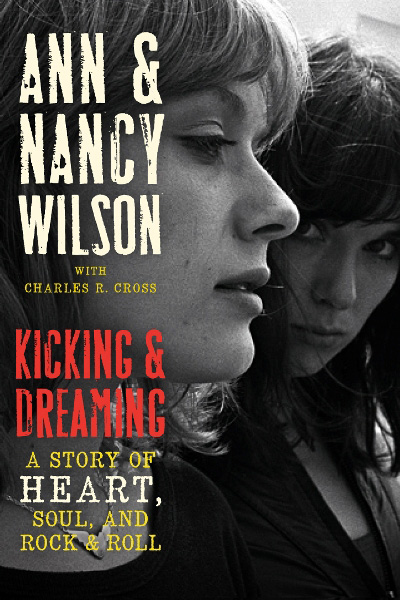 I have made no bones about it that Heart--led, of course, by sisters Ann & Nancy Wilson--were the very first major rock band I ever got to see live in concert.  That life-changing moment for me happened 35 years ago this October 1st.  And it's not enough that the day after that--October 2nd--marks the release of Heart's new album "Fanatic".  How about Ann & Nancy writing the book on Heart?

Yes, those sisters have had a lot of moments in their lifetimes, a few of which were good enough for--no kidding--a "Behind the Music" episode.  So it stands to reason that the sisters teamed up with Charles Cross -- a writer whose credits include biographical books about Bruce Springsteen, Led Zeppelin, Jimi Hendrix and Nirvana's Kurt Cobain, to say nothing of Charles being based in Ann & Nancy's hometown of Seattle -- for a tell-all book, due in just a few weeks, entitled "Kicking and Dreaming: A Story of Heart, Soul, and Rock & Roll".

I wouldn't be surprised if this book will not only be jam-packed with more of those "Behind the Music"-type moments, but also with lots of other interesting things that many fans might not have already known about the Wilson sisters and what makes them rock.

It's about time Ann & Nancy had their own book, so I wouldn't be surprised if Joan Jett and Lita Ford decide in the not-too-distant future when the time will be right for them to write their own autobiographies.