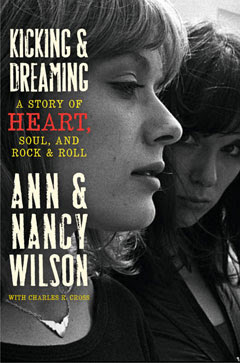 The glamorous and hard-rocking sisters of Heart, lead singer Ann Wilson and guitarist Nancy, first cinched their fame in the mid-1970s with a combination of stadium-sized guitar hooks and tough yet nuanced vocals ("Magic Man," "Barracuda"). After an early-Eighties sales slump, they staged a triumphant comeback in their self-titled 1985 record, which spawned four Top 10 singles and a huge arena tour, and continue to record and tour today.

In this exclusive excerpt from their memoir Kicking and Dreaming: A Story of Heart, Soul and Rock & Roll, which is out on Tuesday and comes on the heels of their first career-spanning box set, the duo recount the silly ecstasy of stalking Paul McCartney across Scotland as well as their debilitating battles with drug abuse. "With all the time in the world, and plenty of money, I became the most famous customer for Seattle's cocaine dealers," recalled Ann, "who were more than happy to deliver, and bring me bottles of pink Dom Perignon as well."

Tom Kelly and Billy Steinberg were one of the most successful songwriting teams of the Eighties. They had written "True Colors" (Cyndi Lauper); "Like a Virgin" (Madonna); "Eternal Flame" (the Bangles); "I'll Stand By You" (the Pretenders); "I Touch Myself" (The Divinyls); and dozens of other big hits.

We were still resistant to the idea of outside writers, but Ron Nevison told me Tom sang as well, and that helped soften me. Once Ron played a cassette of "Alone," I needed no further convincing. I hadn't written it, but it felt like my song. When I sang, "The night goes by so very slow," in "Alone," I didn't have to act.

My sister was never one to mince words. "That is soulful stuff," Nancy said after hearing me run through it. "You speak through that song. The song and your voice really shake hands." Sue Ennis once told me that "Alone" was "more Ann Wilson" than any song in our catalog we didn't write ourselves.

When it came to recording "Alone," Ron Nevison, whose name we had started to sing to the tune of "Bad Medicine" because it rhymed, and because his dictatorial style increasingly clashed with ours, did his magic. He used extreme dynamics between the verse and the chorus, and our excellent drummer Denny Carmassi made the song more dramatic. Ron asked me to delay a moment before singing the chorus after the second verse, and to ad-lib. I wasn't sure what to sing, so I let out a scream. It ended up being exactly the primal emotion the song needed to make it rock. I'd been singing Led Zeppelin songs for years, and now I had my own Robert Plant moment on record.

We named the album Bad Animals, a joke on our band, and our pets. It was released on June 6, 1987, a D-Day of sorts because it would determine whether our last album had been a fluke. "Alone" flew up the charts to become our second number one single. It stayed on top for three successive weeks and became our biggest single ever in the U.K. "Alone" ended 1987 as the second-biggest-selling single that year by any group.

The success of "Alone" also gave us something we didn't have going into the release of the Heart album two years before. We now had a number one single before our tour started, or our album was out. We were following up on success, and not building to it.

We flew to Europe in May 1987 for the start of our tour. All the dates had sold out, including three nights at Wembley. Nancy and I decided we needed a week of vacation before the tour began, so we went early, and we brought along Sue Ennis.

Our intention was to have the three Connies go on a "Magic Mystery Tour" to Beatles landmarks. We spent a couple of days in London, and then drove up to Liverpool. We spent a day sightseeing Beatles neighborhoods, but found our hotel creepy, so we headed to Scotland. We were convinced we could find Paul McCartney's farm. We hadn't discussed what might happen when we got to Paul's door, but with the three of us acting like schoolgirls, we were sure Paul would be happy to see us.

We had no plan, and no hotel reservations. Sue leafed through road maps while Nancy took the wheel of our rented Mercedes, and I provided commentary. We stopped the first night in an inn on the side of the road, and we drank scotch and ate haggis. The Scottish moors seemed free of the influence of MTV, and we were anonymous for the first time in years. We were one of the biggest bands in the world that year, but at the Headley Hall Country Inn, we were simply three silly American girls stalking Paul McCartney.

We knew Paul's farm was on the "Mull of Kintyre," which had been the title of his 1977 single, but we soon found that navigating Scotland by song title was problematic. Our Connie joke was that we were looking for "Junior's Farm," another McCartney song, but that farm was in Tennessee.

We discovered that the only way to avoid the long drive to the Mull of Kintyre was to take a ferry to the end of the peninsula. We didn't have enough days to make the drive and still make our first show of the tour. After an arduous journey we came to the dock, only to find that the ferry had been cancelled due to bad weather.

The closest we got to Paul McCartney's farm was standing on the ferry dock and looking toward the Mull of Kintyre. We knew Paul was there on the other side somewhere, someplace, somehow. We had made it all the way from the teenage bedroom of our Bellevue, Washington, house to the Scottish coast, but Paul McCartney remained beyond our reach.