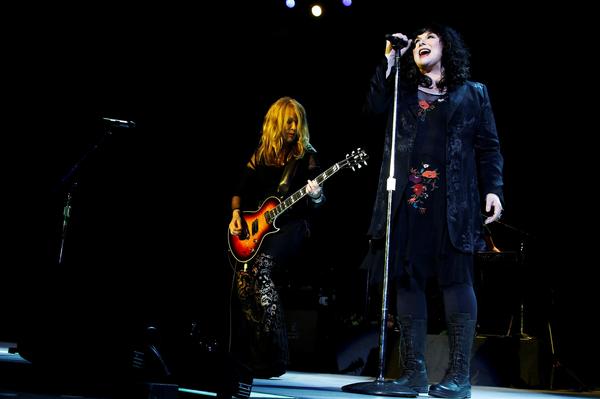 "This is an opportunity for us all to pour our hearts out together," Ann Wilson said to the nearly filled Pacific Amphitheatre on Thursday.

In 90 minutes, the sisters played a 15-song set that celebrated more than four decades of rich musical history. The duo was accompanied by a high-caliber backing band, who authentically re-created the group's classic rock staples.

In addition to the lineup of greatest hits, Heart included a cover and four new songs from its new album, "Fanatic," set for release Oct. 2.

As the stadium lights dimmed, the guitar's sitar-like drones captivated the effervescent crowd.

During the opening moments, Ann Wilson, who turned 62 in June, left the audience awestruck as she unleashed a powerhouse vocal performance. She is undeniably a force to be reckoned with, the ultimate archetype for female rock singers.

Even today, Ann Wilson's voice showed no sign of deterioration. If anything, it is getting better with age.

Her voice took center stage in ballads like "Dog & Butterfly" and "Mistral Wind," which showcased her full range and dynamic capability.

In "Alone," she started off with a soft vulnerable touch and later unleashed her unmistakable belt, which had the crowd on its feet by mid-song.

As the band transitioned to 1976's "Magic Man," there was no disparity in enthusiasm between the new and old material. While remaining true to the landmark melodies, Ann Wilson employed improvised melodic variations that kept the hit fresh and full of passion.

Throughout the evening, she remained poised and was personable with the audience.

Before performing Heart's '80s hit "Even it Up," Ann Wilson confronted the crowd.

Nancy Wilson, 58, proved to be the unsung hero of Heart. Decked out in black bell bottoms, she took over the stage, but only as far as her guitar cable would allow her.

Over the years, she has developed bona fide guitar chops, which were featured in a bluesy acoustic guitar solo preceding "Crazy on You." As her agile finger-picking led into the recognizable melody, the audience let out frenzied screams.

Nancy Wilson took the lead in the Americana-inspired "Walkin Good," a duet with Canadian singer-songwriter Sarah McLachlan on "Fanatic." The melodies were sweet, Ann Wilson's lyrics were inspirational, and more importantly, the hook was memorable.

During the song, Ann Wilson had a chance to play a short-lived flute solo. And a few songs later, Nancy pulled out a mandolin for their '80s hit "These Dreams." The pair is always trying to top the last performance and pulls out the stops.

Later, Ann Wilson returned to the mic for "Dear Old America," a new song the sisters wrote for the troops.

Their father, a Marine in World War II and the Korean War, served as inspiration for the song, Ann Wilson said.

"There were some pretty bad fights," she said. "When he came back, he didn't really come back."

"Dear Old America" was the strongest new song of the evening. The writing was current and included an innovative synth loop, as well as string tracks blended with rock grooves.

Heart's longevity can be explained by its relentless adaptation to today's sound. The Wilson sisters still have a grasp on the contemporary writing curve and thus continue to pump out signature Heart hits.

By the end of the evening, concertgoers wanted more.

After the main set, a relentless crowd held up their cell phones and shouted for an encore.

But Ann Wilson vocal fatigue began to set in during the band's final song, "Barracuda."

"Oh Lordy, here you go," Ann Wilson said with humility. "Thanks so much."

The latter left the crowd with the feel of their new, hard rock album, which echoes Led Zeppelin in its harder rock days.

Heart gave concertgoers a one-of-a-kind entertainment experience that far surpassed expectations. More importantly, the Wilson sisters brought their albums back to life, rather than regurgitating the hits note for note.

Two inseparable sisters, timeless songs and passion were well worth the ticket price.