NORMAN, OK, August 22, 2013 – Heart’s 2013 “Heartbreaker Tour” has been deemed “Storm Ready” and was presented with official documentation by the National Weather Service and WDT officials Thursday, August 15th prior to a show in Dallas, TX.  The StormReady program recognizes organizations with superior communication and safety skills before, during, and after severe weather.  This effort is supported by the services of Weather Decision Technologies®, Inc. (WDT) who provides event-specific meteorological data under its event venue safety model, WeatherOps®.

The StormReady program is designed to enhance an organization’s awareness, preparedness, response, recovery, emergency public notification, and public education related to hazardous weather events. In the process it also enhances the overall emergency management plan, increasing the safety of individuals at all levels and phases of significant emergencies and disasters.
“It is vital to have an emergency preparedness plan in place when dealing with large venue events,” says Rick Smith, Warning Coordination Meteorologist with the National Weather Service Norman Forecast Office. “Receiving the StormReady designation illustrates this concert tour’s proactive approach to weather-related preparation.”

“We’re very proud to have received this recognition from the NWS” says Heart Tour Director Bill Cracknell. “Weather safety has always been a priority to us, and I’m hopeful that initiatives such as this will only prove to further raise awareness of the continuing need to stay ahead of the curve when it comes to preparedness. The WeatherOps model has been an instrumental element and the WDT team has been indispensible.”
WDT’s WeatherOps team directly supports touring artists, venue managers and production companies, varying information disseminated based upon precise weather triggers and the specific needs of each client. Forecasts and alerts are provided to key personnel via internet, SMS, mobile apps, mobile push alerts and direct phone access to a Meteorologist 24/7. WeatherOps boasts the highest resolution weather models in the industry, backed by a staff of 75, of which 35 hold Masters to PhD level credentials. 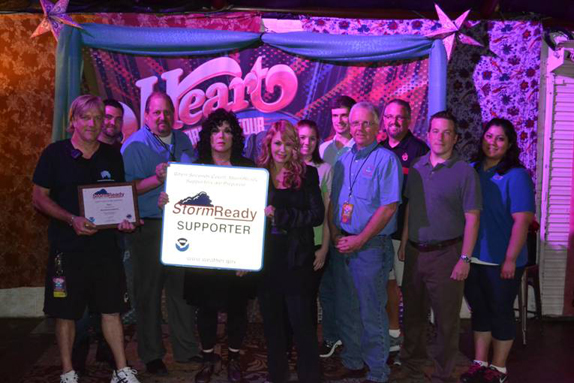 About Heart
Sisters Ann and Nancy Wilson first showed the world that women can rock when their band, Heart, stormed the charts in the ‘70’s with hits like “Crazy on You,” “Magic Man,” “Barracuda,” “Straight On,” and so many more.  Not only did the Wilson sisters lead the band, they wrote the songs and played the instruments too, making them the first women in rock to do so.  In 2013, Heart was awarded a star on the Hollywood Walk of Fame, and inducted into the Rock & Roll Hall of Fame.  Heart is currently on a 34-city headline tour.
About Weather Decision Technologies® (WDT) Founded in 2000, Weather Decision Technologies is a high technology leader in the weather industry, providing life-safety applications and weather decision support services and systems to our partners and customers. WDT's iMap® services provide dynamic, web-based and mobile interactive mapping solutions for the world's leading local media companies. WDT maintains operational offices in Norman, Oklahoma. Corporate website: wdtinc.com