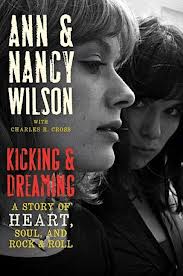 The primary audience for any rock autobiography is, of course, fans of that particular star. When the performer, in this case performers, had important roles in rock history, the potential readership widens to include those who’d like behind-the-curtain peeks into how that history was made.

In the case of Ann and Nancy Wilson, the fact they were music pioneers because of their gender wasn’t how they saw themselves when they started out. When they were young, the difference they claimed they felt between themselves and other girls was that they didn’t want to date The Beatles—they wanted to be The Beatles. Their joint memoirs begin with the vivid story of their ancestor Hannah Dustin who, kidnapped by an Indian tribe, freed herself and killed her captors with her tomahawk. With such genes, if you’re an independently minded woman, why not pick up a modern axe and take to the stage?

Still, while the Wilsons say music has always been more important to them than gender roles, from the beginning they were forced into fighting battles against those who held them as cultural hostages. For one matter, their early careers were guided by lovers and men who served as muses for songs like “Crazy on You” and “Magic Man.” But, on the other hand, un-magical men inspired songs like “Barracuda,” especially those in the musical press who, for decades,   focused more on the sex lives of the sisters, their physical appearance, and nearly everything else other than their music.

Ironically, Kicking and Dreaming spends considerable time detailing these battles and thus doesn’t delve too deeply into the songs of the Wilsons. As Ann and Nancy toggle passages of their memories back and forth, we learn about their formative years an how their father’s military household formed their values and foreshadowed a gypsy lifestyle. Then, we hear, from their own perspectives, the oft-told stories of the days of the origins of Heart with the boyfriend brothers Michael and Roger Fisher. Then, the Wilsons share a series of “devil’s bargains” with record labels like Mushroom and Capitol that at first betrayed the group before forcing the sisters into putting out music in molds not of their own making.

After discussing the backgrounds for Little Queen and Dog and Butterfly, the Wilson’s memoir becomes a rather hit-and-run account of their personal lives off the stage spiced with breezy anecdotes that name drop fellow rock stars they rubbed shoulders, or other body parts, with over the years. Their domestic lives, it might seem, should be the least interesting aspect of their story, but these sections are the most revealing, the most human chapters. Beyond their struggles with weight, drugs, and alcohol, the most poignant pages deal with the sisters desire to be mothers and the steps they went through to fulfill their dreams.

But, in terms of the music, we only get infrequent glimpses. From time to time, Nancy shares a few of her lyrics and praises the role of rhythm guitars in rock. Ann comments on the need for lead singers to be healthy and able to connect with audiences. We hear much about the nastiness of the music business in general, the sadness in changing band members, and struggles getting from one gig to the next. But we read little of what went on in the studio or rooms where the songs were crafted. Perhaps another book can be built on such stories, a heart retrospective on the music and nothing but the music.

All this being said, Kicking and Dreaming is well worth reading for what the sisters do share with us. heart fans, of course, have already snapped up their copies. Judging from other reviews, many, like me, are as interested in what wasn’t told as much as what was. This seems a compliment to me—the heart legacy is rich enough that we want to learn about them now on a multitude of levels, especially the personal and the creative. That’s a giant leap forward from the days when writers wanted to know if they were incestuous lovers or photographers wanted more skin. Kicking and Dreaming is all about flesh and blood, heart and soul--just like their music at its best.