Remind me to never wear flip flops on a marble floor covered in leave in hair conditioner.  That's how you get an occult fracture on your left wrist.

The most common fracture of all fractures, and the easiest one to heal.

So if you happen to notice another guy playing on stage with us for awhile, his name is Serj (a friend of Kristian) who will be my wingman and guitar helper until I'm totally healed.

I never expected to learn so much about wrist splint  fashion as I have in the last few weeks.  Maybe I can start a new trend! How about a combo of both - here is me "planking" with a wrist splint on 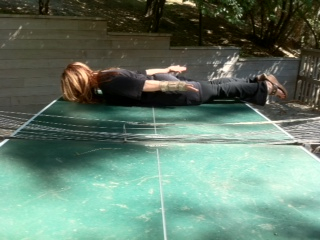 Occult fracture  n. A fracture that does not appear in x-rays, although the bone shows new bone formation within three or four  weeks of fracture.
The American Heritage® Medical Dictionary Copyright © 2007, 2004 by Houghton Mifflin Company.

a fracture that cannot be detected by radiographic standard examination until several weeks after injury. The break is most likely to occur in the ribs, tibia, metatarsals, hip, or navicular. It is accompanied by the usual signs of pain and trauma and may produce soft tissue edema. Magnetic resonance imaging or a bone scan may be used to confirm a suspected occult fracture.